There’s an issue that plagues technicians and consumers alike. When a Microsoft Surface Pro 4 suddenly no longer powers on. Sometimes this happens seemingly randomly, other times, immediately following a repair.

Parts of this puzzle have already been answered elsewhere on the internet. But what happens when its “neither of those”?

With no available schematics, it’s difficult to determine the fault. We had a few of these in the queue, so we decided to reverse engineer one. We’ve put together a list of the 3 most common failures to check for, in order of likelihood. If you made it here from a search engine, you’ve probably already seen this failure 10 times over.

A diode is effectively a one-way valve. It allows power to travel in one direction, and blocks it from traveling in the other. Unfortunately, a diode also causes a drop in voltage as power passes through it (known as the “forward voltage”). This is generally not ideal or efficient, and the voltage that is lost results in heat dissipation. This effect worsens the more current the diode passes.

Diodes also have a rated maximum current. Exceeding that current (say by overloading or short circuiting) can result in failure. Diodes fail in one of two ways. Either the forward voltage increases substantially (sometimes infinitely), or the diode effectively turns into a wire, allowing current to flow in both directions.

A Schottky Diode is a slightly “better” diode. These are commonly found in all kinds of electronics. Schottky diodes have a lower forward voltage compared to their silicon counterparts, are available with higher current ratings, are more efficient, and as a result allow for higher switching speeds.

The Surface Pro 4 has an abundance of Schottky Diodes on the motherboard. In reality, any of them have the potential to fail. In most cases though, one of the diodes pictured here will fail. These diodes allow either the battery or the charger to power the device. The use of diodes means that whichever input is higher voltage will feed power to the unit, without feeding power backwards into the other input. For example, with the charger connected, the charger will power the unit, without feeding the battery and potentially over-charging it. Conversely if you leave the charger connected but not powered on, the charger won’t cause the battery to drain.

If you have a lower end Surface Pro 4, you may find that the “charger” diode is not populated. This is because the dedicated charging IC has enough capacity to charge the battery, while the battery simultaneously feeds power into the motherboard. In either case, a failure of the diodes will present with the following symptoms:

So if a diode is bad, how can we tell?

With the battery isolated (this is important) use a multimeter in forward voltage test mode (diode mode).
Measure across the diode leads. You should have no more than 0.250V forward voltage, and no less than 0.100V.
With the probes switched around, you should get a very high voltage (like 2.800V), or “OL“.

To replace the defective diode(s), you may be able to use the “spare” that we have noted above.

If you don’t wish to do so, or if you have more than one defective diode, we also sell replacements in our store. If the Schottky Diodes are good, or you replaced them both and the device does not work as expected, the next thing to check is the “fuses”. There are actually a number of these on the board. So many that we can’t list them all. We’ve circled the most common “fuse” to cause no power.

There are 3 variations of these fuses we have seen. In most cases they are a 0 ohm resistor, either marked “0”, or “000”. We still call them fuses, but in reality, they are 0 ohm resistors, aka “links”, aka “jumpers”. Less commonly, Microsoft chose to populate these with actual fuses, typically marked P or L.

If you locate the fuse we have circled, whatever it looks like is likely going to be the same for all the others.

If you’ve ever used continuity mode on your multimeter, you will be quick to grab it out and check for the “beep”, indicating a connection.
Before you do though, be warned that this method is NOT fool proof, and may lead to misdiagnosis.

While a lack of continuity would certainly indicate a “blown” fuse, a 0 ohm measurement or “beep” certainly does not indicate a working one. This actually applies for all kinds of devices, and we learned this the hard way on iPhone Backlight fuses many years ago.

To confirm operation of the fuse, we set our DCPS to 1V, and 0.05A (50mA) to 0.10A (100mA).
The voltage here really doesn’t matter, but its a good habit to use less than the circuit is designed for. This prevents damage to components should you accidentally slip and power the circuit.

To replace the fuse, you can use a 0 ohm resistor, an iPhone/iPad backlight filter/fuse, or even a piece of wire (although we would advise against it). Where to from here?

Unfortunately, this is where the availability of information on the internet ends. It would seem that without schematics, nobody has worked out (or documented) what causes no power if its neither of the aforementioned.

We had a few devices that fit this criteria, so we set to work reverse engineering them to find out why.

To begin with, we connected the device to a DCPS directly and prompted the SP4 to boot with the power button. We figured if there is a short somewhere, injecting power and looking for heat dissipation is a good way of finding it.
We got no response at all.

Upon probing around, we find that we have none of the above. Instead, we have a curious 0.157V. That’s bizarre. We appear to have located an issue.

Now to find out whats causing it..

Luckily, we have multiple devices in our queue, some of which are now working. We quickly probe the power button on a working device and find that we have 3.3V. Now we need to find out where this 3.3V rail goes, where it comes from, and why we don’t have it on some devices.

We found a 3.3V regulator on the board, but unfortunately, its generating 3.3V no problem. There must be more than one. We started probing around and found our mysterious 0.157V in multiple locations, next to multiple IC’s. While investigating our missing 3.3V rail, and mapping out all of the locations we have a mysterious 0.157V, we noticed a suspicious mark on the IT8528VG.

Just next to this is a capacitor where we expect to find 3.3V, but instead have only 0.157V

We cleaned the IT8528VG to see if it was an impurity sitting on the surface. Nope. That’s a very, very small hole. Huh…

At this point, we were thinking this IC might be responsible for our 3.3V output. A hole, and subsequently internal damage, would certainly explain why the output is low. We removed the IT8528VG and tested again, expecting to have 0V. Our 3.3V is back!

It turns out, the 3.3V rail is actually incredibly low current. So much so that a short on the rail, or excessive current draw, doesn’t appear obvious when powering the device from a DCPS. We assume this rail is a reference for digital I/O. We still don’t know where it comes from, but we now know why it was low. Our IT8528VG has failed, and developed an internal short.

We just happened to have a donor device, so we promptly pulled the IT8528VG from it. Without a stencil, we had to manually reball the IC. 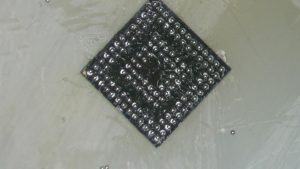 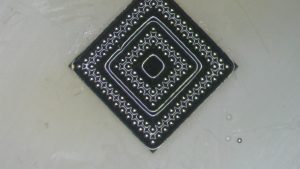 With a replacement IT8528VG ready to go, we installed it and checked our 3.3V rail again.

Everything looks good. We have 3.3V in all the places we previously had 0.157V. This includes our power button.

We checked the device on the DPCS. Upon prompt to boot, we immediately see current draw that is consistent with CPU activity.

Time for a final test.. We looked at the other devices in our queue.


Disclaimer: We can’t say for sure that your device will absolutely have one of the 3 failures mentioned. There are many events that can cause many parts to fail. This is just a list of the most common failures we have encountered.

We have however fixed all of the Microsoft Surface Pro 4 Tablets in our queue. We have also assisted in the diagnosis of other devices around the world suffering from the same issue. In almost all cases we have encountered so far, the failure has been one of these 3 things.