Damaged beyond repair. Any chance of data recovery?

Our team received this device via mail, with a request to recover the important photos. The motherboard had extensive damage, bends, and fractures. This wasn’t going to be a straight forward data recovery.

Initial inspection showed that the board was mostly intact. The upper cell antenna was snapped off, and the lower section of the motherboard was severely bent. We carefully removed the device from the housing, which made the severity more apparent. The EMF shields were actually separated from the board! The damage to the cellular area was so severe, the transceiver IC had completely shattered. Removing it was no easy task, as it was in about 100 pieces. 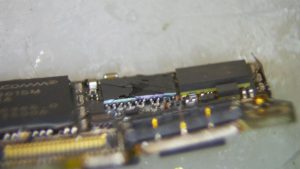 It was pretty clear at this point that the entire cellular section would be damaged. Luckily, we didn’t need cellular function for data recovery. Unfortunately though, much of this area gets its power from the main power rails. The device isn’t going to function at all with a bunch of parts shorted. After our microsoldering tech isolated the severely damaged cellular/baseband area, we were able to get the phone turning on.

The trouble wasn’t over though, as there was no touch function. We had to perform some rework on the Touch IC area. This wasn’t completely unexpected, given the severity of the shock the device has sustained.

After a few final checks and some very careful, extensive rework on the upper area of the device, finally, we had a device that could connect to a computer. At this point we immediately started the backup. Not just of the photos, but ALL of the data from the device. Then we exported the photos and videos so that the customer could access them directly. And that’s basically it!

This device was so extensively damaged, no amount of replacement batteries, screens, and modular parts could have ever recovered the important files. There are no shortcuts to data recovery, when a motherboard is damaged. Fortunately for this very lucky customer, the staff at A One Mobiles and Repairs were skilled enough to obtain the requested data in this instance. This is largely due to the fact that nobody had performed any motherboard repairs already, further complicating the process.

If your device has a motherboard fault, and you have important data, don’t hesitate to contact us for a quote.

Previous: iPhone 7 and 7 Plus Audio IC Repair.
Next: Charging, Batteries, HDQ/SWI – iPhones/iPads How does it work?